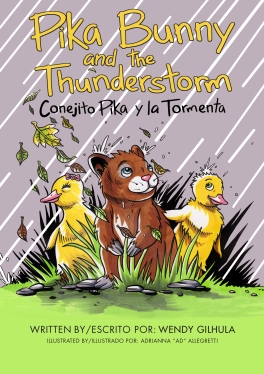 Juvenile author Wendy Gilhula has sent me a copy of her debut work. Pika Bunny and the Thunderstorm has some of the sweetest illustrations I’ve seen in a long time!

Gilhula and I worked together some years ago on prose and poetry she had written. The ideas she had just would not let her go. One of them was a series of stories about a bunny named Pika.

Pika Bunny explores the world and illustrates the most touching elements of the parent-child relationship. After Gilhula put her ideas down on paper, she found a publisher who wanted not just one of the works, but several.

Today she is celebrating because Pika Bunny has found life in several formats. The debut story is available in paperback and hardbound versions. There are also English-only and Spanish-English editions, for a total of four versions!

When I received my copy, I reread the story that had demanded the author’s time and focus. Pika Bunny is frightened by a thunderstorm. Then he learns all the good things about rain and thunder. Pika Bunny triumphs over his fear! 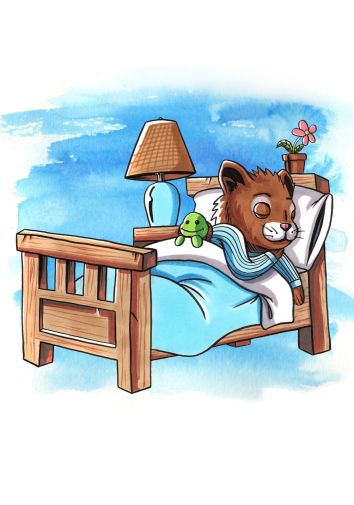 From the first page, I really was taken in by the illustrations. Adrianna Allegretti is the illustrator here.

Like most children’s books, the illustrations stay focused on the characters. In a few places, however, Allegretti opts to draw only the storm or other elements of nature.

The combination of the characters in nature, in their cozy interior spaces, and the ones that allow nature to roam free across the page lend this work a particular feeling readers will love.

One of the coolest things about Pika Bunny is that the work is available in a dual-language version. The story is told in Spanish and English, with the same text running in both languages on the same page.

The work has been nominated for the Society of Children’s Book Writers and Illustrator’s (SCBWI’s) Golden Kite Award.

Of special note is the dedication in the front of the book. Gilhula thanks a number of individuals, all by listing their first names and the first initial of their last name. These are all kids who were her beta readers!

She wanted to honor the contributions of these dedicated fans. And here she has, while also preserving their identities and therefore their safety.

Want more of this cuteness and sweet words? Tune in next week for an interview with author Wendy Gilhula!

Check out this cool blog post for readers and writers!

Connect with a Publishing Consultant